Content promotion is changing. My thoughts on where we go from here

Back in early 2016, we coined the term “community content promotion”. The linked article above shared how we grew our traffic from 0 – 32,977 users in 5 months with this promotion strategy.

Here’s a very simplified version of the strategy outlined in the article:

There is an important, fundamental shift in how content marketing works when you apply this community content promotion strategy: instead of just waiting for SEO traffic to “kick in,” you’re strategically attracting targeted traffic immediately. 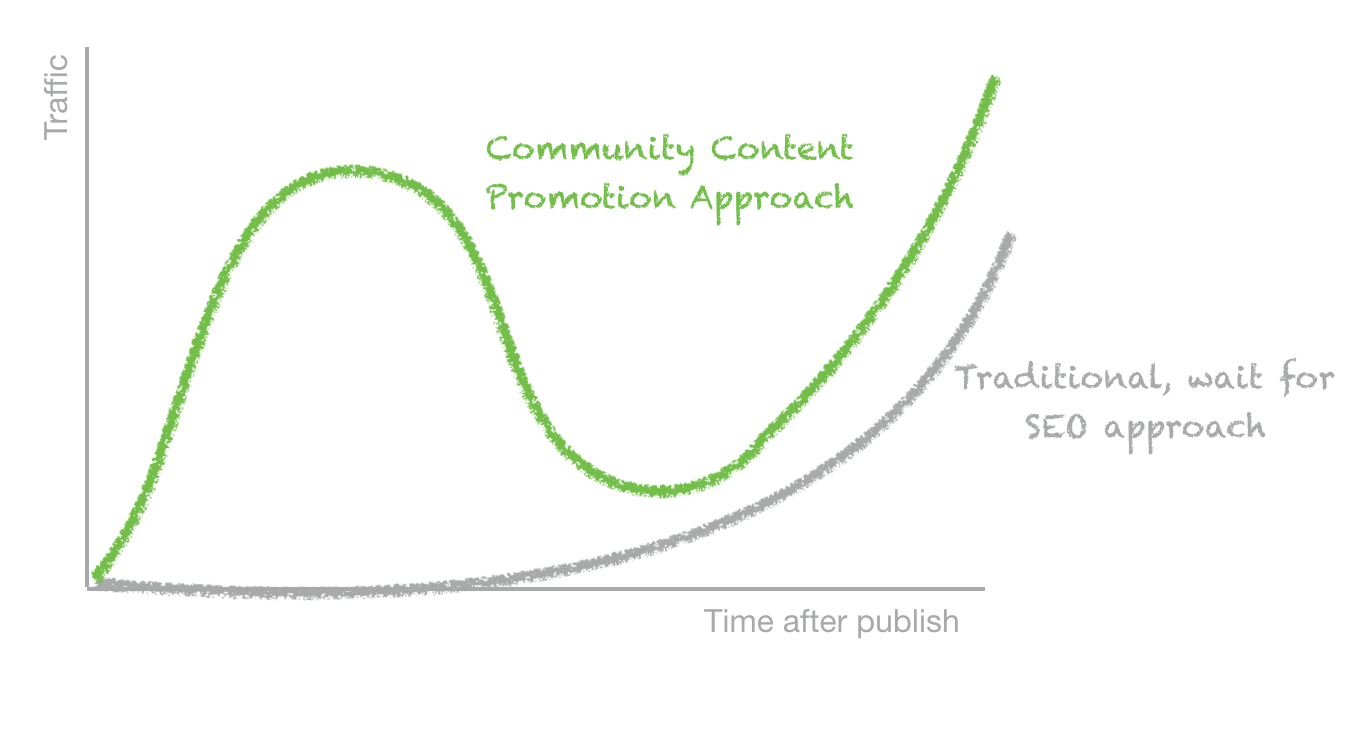 You drive results in the short term while building towards longer-term sustainable growth from SEO and referral links.

This immediate spike in traffic has significant benefits and alters the way content is viewed and utilized in your business:

However, over the last 6 months, we’re starting to see a larger shift in the landscape, and we are unsure if this method will continue to be successful in the long term.

For example, here’s an image showing the traffic we generated from posting in groups on LinkedIn and Facebook for articles we published for a client last October, 2017: 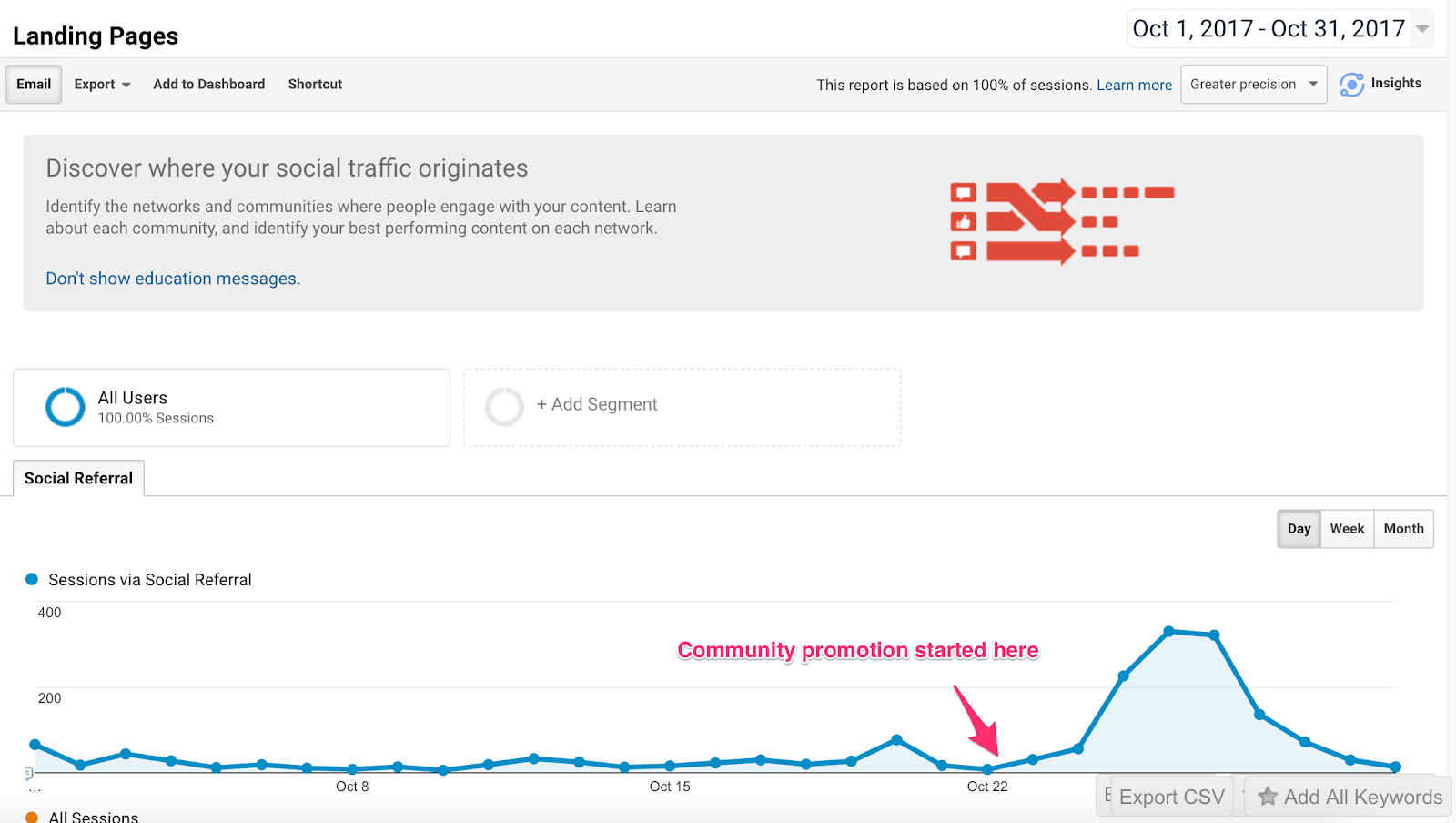 For the first article we published, we got 864 sessions just from Facebook and LinkedIn in the first ~10 days of promotion. The second article we created got a little over 100 sessions.

Article #2 got the highest traffic from communities with 44 sessions. Article #1 came in second with 38 sessions.

This graph pretty much sums up the trend we’re seeing across many clients. This graph shows monthly sessions driven from social compared to all sessions. They’re inversely correlated. 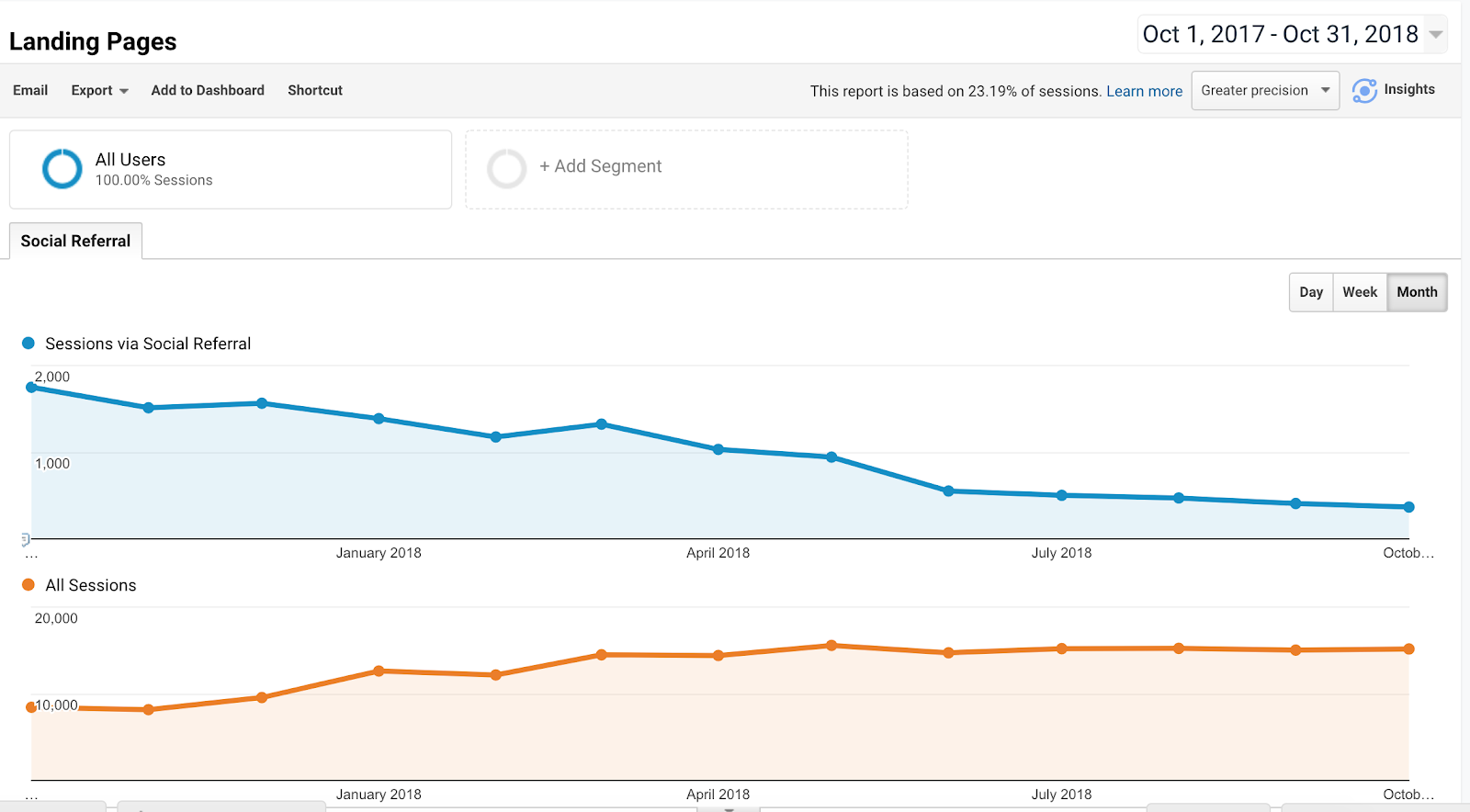 This doesn’t mean you can’t find success doing community content promotion — especially for niche industries. However, this is largely what we’re seeing in marketing, sales, tech, and larger industries that compete heavily with content.

So, I want to share some thoughts on where we go from here.

Why is the way we do content promotion changing?

While the former is a tried and true method, it takes a long time to see results come from it. For most companies, it takes 1-3 years before you really start seeing significant traffic gains and lead growth.

The latter just isn’t effective unless you have a significant, highly-engaged following on social media.

The idea behind community content promotion was that you could drive traffic in the short term by leveraging communities that have already been built with your target audience in them, sharing the content in those places– thus, attracting visitors to your site. The community content promotion method gets traffic, it helps build links, and gets your content in front of the right target audience, while simultaneously building towards the long-term growth of your blog (SEO).

However, with the recent shift, many of the platforms we use to do community content promotion are seeing diminishing rates of return and declining organic reach. To put it in another way, the results that we’re seeing from this method are becoming less and less.

For example, on LinkedIn we used to be able to share a link and get 3,000+ impressions, now we’re getting the reach of under 1,000. On Facebook, group posts aren’t showing up in the newsfeed as much as they used to. On Reddit, more and more of the subreddits don’t allow you to share links. So on and so on.

For industry specific platforms, the engagement is slowing, people are gaming the voting system and bad content is rising to the top- thus driving away many of the engaged users who went there for a highly curated resource, or the channels that used to drive much of the results are dying completely (inbound.org RIP).

Rand Fishkin summed up a lot of my thoughts on what’s changing in his article called The Powerhouses of the Internet Are Turning Hostile to Websites (highly recommend reading it to get another perspective on a larger shift that we’re seeing), but I think the larger shift we’re seeing is that the platforms (Google, Facebook, LinkedIn, Twitter) are moving from an obsessive focus on user engagement and user experience, to an obsessive focus on turning a profit. Therefore, the algorithms are changing to prioritize paid distribution and organic reach is reducing.

The way we think about content promotion has to and will change.

But I’m not okay with saying that the only answer to our content promotion challenges is SEO. In other words, I’m not okay with settling for the “wait it out” grey graph at the top. Nor am I going to settle for the answer being that you have to build a massive social following so you have people to share your content with.

I think there are other ways to attack this challenge. I still think to do content marketing well, we need to think about driving short term results through some sort of “active promotion,” while simultaneously working on the long-term goal of sustainable SEO traffic that drives leads.

While we haven’t figured out exactly which channels or what the mix of channels will be going forward, I want to share some things that we’ve been testing and where I think some opportunities are.

We’ve been seeing CPCs anywhere from $.11 – $.88 per click, $.18-$1.40 per landing page view. For this to really scale, we’d need to see costs on the lower end, but costs can come down the more we test audiences and iterate on creative. We’ve started to see conversions come in directly from promoting our content at fairly low costs (however, direct attribution has been somewhat of a nightmare). At this point, the results are promising, and we’ll continue testing this channel.

We’ve been testing 3 things on the audience side:

On the creative side, we’ve been testing:

We tested Reddit ads earlier in the year. While they were cheap to run (if I remember correctly we were getting clicks in the $.10 range), Reddit’s platform posted much higher click numbers than what we actually saw go to any of the sites on GA.

We felt like we were getting charged for clicks that didn’t actually show up in our analytics as visitors – so we stopped advertising here.

Being that we’re largely focused on doing content promotion for B2B companies, we want to start testing LinkedIn ads to see if we can drive highly qualified traffic and conversions directly from this channel.

Hypothesis: LinkedIn can drive higher quality traffic than FB because we can target directly by job title, company size and a lot of other defining attributes that we know about the customers we’re targeting.

Concern: The CPC is much higher than Facebook, so we’re not sure if this will be profitable or if we’ll get the results we’ll need for the spend amount.

We’re in the infancy of testing Twitter ads again. I tested Twitter ads a couple years back, but the problem was there weren’t too many targeting options to define our audience and the costs were high relative to the amount of people that we were able to target.

That being said, it’s always good to retest things because these platforms are always changing, and their ad products are improving.

Hypothesis: We know we get a lot of highly qualified traffic from Twitter, so we think we can get this to scale by using paid.

Concern: Do we have the targeting we need to drive targeted traffic to the content we promote? Are we able to get the clicks at a low enough cost?

Hypothesis: If answering questions can drive qualified organic traffic and conversions, paid should be able to get similar results.

Concern: Their ad platform is newer so not sure how good it is yet. Haven’t heard of anyone else seeing results from this yet – however, sometimes that’s a massive opportunity.

Email has always been a great channel for content promotion. The biggest source of short term traffic for our website, and many others, has been building a list and emailing blog posts to that list.

We have two hypotheses for this idea:

If you are doing content for yourself or a single company, in our minds, growing an email list of your target customers and keeping that list happy and engaged should be an essential part of your marketing. Despite how many people like to report email as old fashioned, it continues to work, and most importantly, it is not owned by someone else, your list is yours.

Build Our Own Community

For those that have seen me tweet about declining results on communities, many people have reached out pitching us on the idea of starting our own community.

While I like the idea in theory, I don’t like the idea of building a FB group, LinkedIn group, or any group that lives on another platform. Mainly because I think it’s important to own your own platform so that you’re not affected by a platform changing the rules, losing engagement or completely dying.

Hypothesis: We could build our own community like Inbound.org, or a few niche communities for various verticals that our clients are in.

Concern: The time investment it would take to get this off the ground.

In summary/ what’s next?

As the above screenshots showed, traffic from the larger social platforms has significantly declined. We’re still seeing a decent amount of traffic come from some of the niche communities though. It’s not to say that community content promotion is dead or that it doesn’t work, because it still does for certain niches, but we’re heavily focused on finding new promotion tactics because we do see it becoming more and more challenging over the coming years.

We’ve already started testing some of the ideas that we’ve talked about here, and we’ll continue to test a lot more. Once we figure out what works or what we’ll do going forward, we’ll write about it, and share our learnings with you.